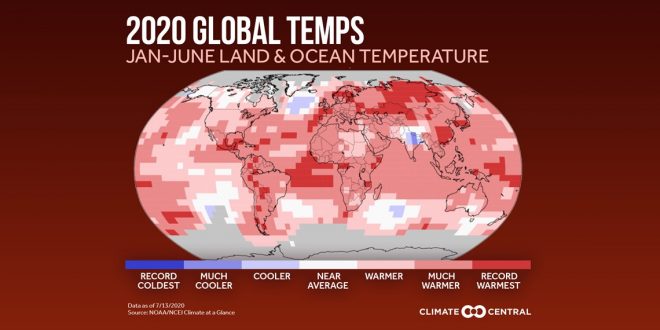 2020 was Tied for the Hottest Year Ever Recorded

In 2016, unprecedented global temperatures made international headlines for the hottest year on record. However, new data analysis from the European Union’s Copernicus Climate Change Service reports that global temperatures in 2020 have matched the global temperatures found in 2016. In 2020, global temperatures were found to be 0.6 degrees Celsius warmer than the 1981 to 2010 average, and roughly 1.25 degrees Celsius above the pre-industrial average. Data found by the European climate agency shows that last year’s global temperatures have brought the earth even closer to the proposed 1.5 degree Celsius global warming threshold. This 1.5 degree Celsius threshold has been recognized by the United Nations Intergovernmental Panel on Climate Change (IPCC) as the maximum temperature that should not be exceeded to avoid detrimental impacts on Earth. Scientists have cautioned that if Earth’s temperature nears the threshold, there becomes significant risk for large-scaled natural disasters such as extreme wildfires and dangerous floods.

Natural disasters that occured in 2020 provide a glimpse of the many disasters to come if the earth’s temperature continues to rise. In January 2020, extreme wildfires raged through Australia, destroying thousands of homes and wildlife ecosystems. The unprecedented wildfires charred a part of Australia larger than the area of Florida. In the future, scientists believe that wildfires are 30% more likely to happen due to climate change. In Siberia, there was a 10-degree increase in temperature compared to the previous year, which surprised scientists because Siberia has historically been one of the coldest regions in Russia. Scientists attributed the rise in temperatures in Siberia to melting permafrost caused by an oil spill of 20,000 tons of fuel from a power station into a nearby river. Australia and Siberia were just two of the many countries that experienced the profound consequences of climate change last year. If the global warming threshold is surpassed, many more parts  of the world will experience more devastating heatwaves and hot summers, greater sea-level rise, and extreme floods and wildfires.