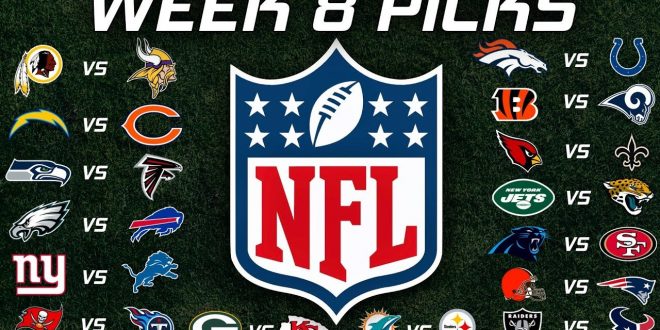 Week 8 of Sunday football has come and there are many exciting matchups that we’ll be looking out for.

Baltimore and the City of Steel will be going head to head. With the Steelers boasting a 6-0 start to the season and the Ravens with a 5-1, it will be a very exciting matchup. The Steelers, who have a phenomenal defensive line, will be focusing on Lamar Jackson, the speedy quarterback who plays almost like a running back when necessary. Last year, this same matchup occurred where Jackson was kept back with 5 sacks and 3 interceptions, this time hoping to produce the same product as well as keeping him under 50 rushing yards.

The Vikings and Packers game is a mismatch by anyone’s standards. The Vikings, who are currently 1-5, are struggling to keep up with their opponents, who are 5-1. Though the kicking game might not be too ideal due to the 40 mph winds, it will be interesting to watch Justin Jefferson and Adam Theilen go head to head with Davante Adams and Aaron Jones. In fact, we saw this in week one where the Vikings managed to stand their ground, with the Packers winning 43-34. The issue will definitely be seen in the Vikings defense.

The Rams vs Dolphins matchup will be very interesting, especially because we’ll see the Dolphins’ new first round pick quarterback, Tua Tagovailoa, match up against the Rams’ defensive line led by Defensive player of the year and 99 Madden rated Aaron Donald. Ryan Fitzpatrick, the previous quarterback for the Dolphins, only had 2.41 seconds to throw. Tua will have to keep that same energy especially against the Rams.

Many are thinking that this will be an easy game for the Bills considering they are 5-2 versus the Patriots, who are 2-4. But what many are forgetting to take into account is that the first 4 teams that the Bills faced all had bottom 4 defenses, making it easy for the Bills to get in some easy points. This time, Josh Allen will match up against a solid defense and Bill Belitchik, arguably the best coach in the league. With the chances of rain and wind, punters Jake Bailey (Patriots) and Corey Bojorquez (Bills) will be the key factors determining this tossup.

There is not much to say for the game between the Jets and Chiefs. Previous Super Bowl winners led by Patrick Mahomes, arguably the greatest quarterback in the league, met with the Legion of Zoom, Tyreek Hill, Mecole Hardman, and Clyde Edwards Helaire, will compete against a misshapen team that hasn’t won a single game this season. The only way they could possibly pull their weight is by forcing turnovers–which they are quite good at, but this seems quite unlikely considering Patrick Mahomes has only thrown one interception in 7 games.

One of Sunday’s most anticipated games will be the 49ers vs the Seahawks. The Seahawks are 5-1 with Russell Wilson, the best quarterback other than Mahomes, along with underrated player Tyler Locket and up and coming 2nd year rookie D.K. Metcalf. The 49ers, previous Super Bowl contenders, have had a rough start to the season with numerous injuries. But, with Kittle coming back to his original dominant self, as well as Deebo Samuel and Jimmy G., it will be tough to guess who will win.