Home / Global Environment / 10 Years to Save the Leatherbacks 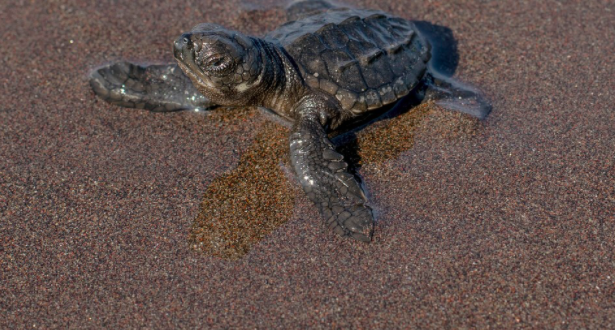 10 Years to Save the Leatherbacks

The Leatherback turtle is the biggest turtle species in the entire world. They have tough, rubbery skin, can weigh up to 900 kg, and reach over 2 m in length. The turtle can migrate long distances, even crossing the Pacific Ocean. However, conservationist groups say its future can be terrible because of the threats it faces.

Every year, multiple Leatherback turtles die from entanglement in fishing nets. At its current declining rate, the East Pacific Leatherback turtle population, unique to this part of the ocean, will perish in the next 60 years. The population has decreased by over 90% since 1980. In other words, it is considered Critically Endangered in the IUCN Red List. Fauna and Flora International (FFI) and other conservationist groups say that we have about 10 years to put significant measures in place to save them.

Although it is considered as one species, every population is reproductively distinct and, therefore, genetically unique. The Pacific Leatherbacks are the ones most at risk, with both Eastern and Western populations endangered. Key nesting habitats in the Eastern Pacific are located in Mexico and Costa Rica, with some isolated nesting in Nicaragua and Panama. There has been a decline greater than 90% in the female nesting population over the last few decades because of marine pollution, light pollution, and other factors involving human activity.

Alison Gunn, program manager for the Americas and the Caribbean at FFI, says that this population is unique to the East Pacific and cannot be replaced genetically. She also stated that we need to increase the collaboration that is already happening to make sure this population is not lost.

However, we have good chances to increase and stabilize the population if we accomplish 2 things: